Sarah MacDonald is the Director of Music at Selwyn College, a constituent college of the University of Cambridge in the U.K. She is also Director of the Girl Choristers at Ely Cathedral. Sarah has been at Selwyn since 1999, and is the first woman to hold such a post in an Oxbridge Chapel. A Victoria native, Sarah studied at the Victoria Conservatory of Music from 1981 to 1987. Memories of the Victoria Conservatory of Music

“Those were massively inspiring years for me,” she recalls. “Alma Brock-Smith was an extraordinary teacher, a world-leading pedagogue and musician. Add to that the VCM Syllabus, which I still refer to and recommend to students to this day. Everything I know about keyboard technique comes from the VCM Syllabus. Alma taught me that a thriving musician is like an Olympic athlete – it’s all about the daily slog and discipline. She was dedicated, and she came to every competition, every performance I ever did. She understood me and recommended what music repertoire would work for me. I had an affinity for Bach – no big Russian fireworks for me, as others did. Alma understood what would work for me as a musician.”

After completing one year at Camosun College, Sarah transferred to The Royal Conservatory of Music in Toronto, where she was one of the first students enrolled in a new program which would later be named The Glenn Gould School. Sarah studied with Leon Fleisher, Marek Jablonksi and John Tuttle.

“At first I thought I wanted to be a concert pianist, but I soon realized what I really wanted was to be a conductor. I particularly wanted to do high-level choral conducting and for that, I needed to play the organ. GGS does not offer a degree, and so I went to Cambridge on a scholarship as Organ Scholar of Robinson College. I was offered the chance to play the organ and run the music program at Selwyn College and that side of my career really took off.” 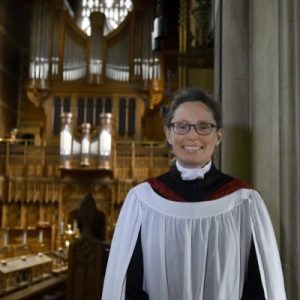 Sarah has played numerous recitals and made over 35 recordings, variously in the guises of pianist, organist, conductor and producer; she is a winner of the Royal College of Organists (RCO) Limpus Prize. Sarah has taught organ and conducting for Eton Choral Courses, Oundle for Organists, the Jennifer Bate Organ Academy, and courses run by the RCO, and she has directed the annual Girl Chorister Course at St. Thomas’s Church Fifth Avenue, in New York City, as well as other residential choral courses in the United States.

Sarah holds the Fellowship diploma of the RCO, and has also been an Examiner, a Trustee and a member of the Academic Board. She is also Director of Ely Cathedral Girls’ Choir, and is a published composer and writer. Sarah also finds the time to write a monthly column for American Organist Magazine and she has been approached to lend her name to a series, The Sarah MacDonald Choral Series, launching in 2019.

Enjoy The Huron Carol arranged by Sarah MacDonald, sung by the Girl Choristers and Lay Clerks at Ely Cathedral.

The VCM is proud to include Sarah MacDonald amongst our Notable Alumni. If you’d like to submit your own alum profile, send us an email for more details.